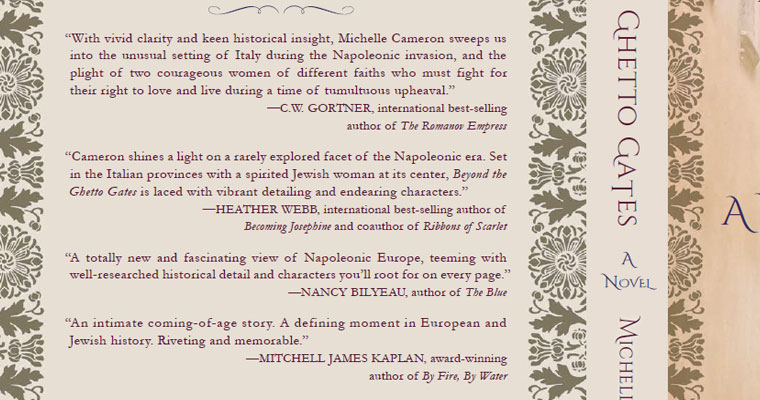 What sells a book? I’ve already discussed the importance of the right cover and the right title in previous blog posts. Since books are so often sold based on their what appears on their exteriors, the next critical step in a book’s marketability is the back cover. And there, one way to make an impact is to quote recognizable writers who pat you on the back and say – publicly – yeah, you did good. In other words, a blurb.

This can be a nerve-wracking process. First, you must identify who might be willing to spend the time reading your manuscript, and whose endorsement would lend luster to your work. “Best if you can get someone who has been on the New York Times bestseller list, Mom,” counselled my publisher son.

I personally knew three people in that category. Well, perhaps claiming that I “knew” them might be a bit of a stretch. One I’d spent a small amount of time with at a book festival, while the other two were guest speakers at The Writers Circle events. While I wasn’t approaching strangers, none of the three were best buds.

And all three passed.

I also approached two others who were virtually strangers. I spent a long time composing those solicitation emails. Both had written novels that had a direct connection with my work. One wrote me a long and thoughtful email explaining why she couldn’t do it. One ignored me completely.

After swallowing down my disappointment, I recognized none of these rejections were personal. When you approach other writers, you often buck their own busy schedules. They are immersed in new writing projects or busy promoting their work, and simply don’t have the time or energy to read. And often, especially after achieving a certain level of success, they are overwhelmed with requests like mine, and have to pick and choose which to respond to. The writers who wrote back and turned me down all explained they were simply too overextended. I suspect the fifth might have felt that she wasn’t willing to lend her name to someone she’d never heard of.

And there are definitely writers who never blurb anyone. I know of one specific writer who once said as much in a public post. So, even though a blurb from her would have been solid gold, I didn’t waste her time – or mine – in soliciting one.

Sounds like all I encountered was blurb rejection, doesn’t it? But very much to the contrary; I’ve been honored by the large number of best-selling and well-regarded writers who were willing to read and endorse my work.  I received so many wonderful testimonials that my novel will not only include some on the back cover, but will also have a “praise sheet” for the overflow.

But still, even after they agreed, the wait for them to read and comment was nerve-wracking.

Why? Aside from your beta readers – who recognize that the manuscript is still fluid – these are the first people to read what is going out into the world. And they are people whom you greatly respect and look up to. What if they hate it? What if you got an email response back saying – well, sorry, I couldn’t find the time to do this after all. Or an even worse possibility – sorry, I just can’t put my name to this mess!

To my utter relief, that didn’t happen to me. There was one writer – an Orthodox Jewish writer – who did find she couldn’t give me a blurb after all. But it wasn’t about the story or the writing, which she praised. No, it was about the sex.

And yes, I do have that one torrid sex scene in the novel. It isn’t gratuitous as it helps to establish a certain character’s, well, character. But I understand why it made her uncomfortable.

As the other responses started to come in, I was gratified – no, ecstatic – to read what they had to say. You can read their advance praise here – just scroll down the page.

And as much as I loved every single one of the blurbs I received – and feel incredibly grateful to my tribe for their praise – there are a couple I’d like to single out. One is Michael Goldfarb, who is not, himself a novelist. Michael’s splendid nonfiction book, Emancipation: How Liberating Europe’s Jews From the Ghetto Led to Revolution and Renaissance, had been my introduction to the story of Napoleon and the ghetto gates. Having his imprimatur on my work is mind-blowing. The second, by Michelle Moran, touched me similarly, since her novel, Madame Tussaud, is one of the most evocative descriptions of the French Revolution I’ve ever read, and the moments when she described what revolution meant to French Jews will stay with me forever.

Apparently, there’s a phrase in sports journalism that is so overused that it is considered a cliché – when a sports figure says that they are “honored and humbled” by some achievement or praise. Yet, I can’t think of a better way to describe how touched I am by the generosity of my fellow writers. I am, indeed, both honored and humbled – and very grateful to them all.