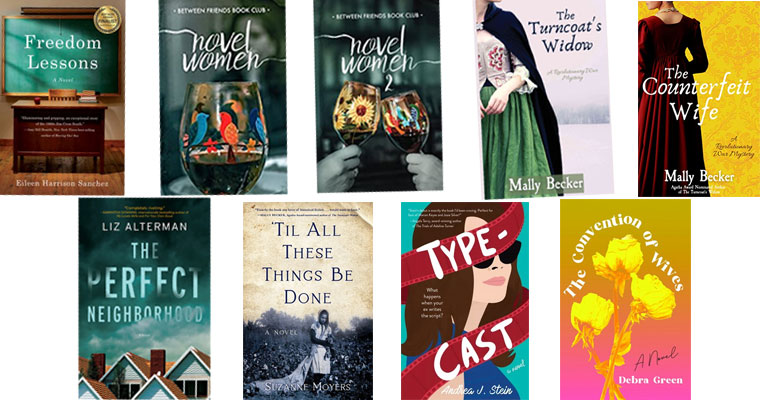 When I began working at The Writers Circle, I honestly didn’t anticipate that I’d experience three book launches by my students within the span of two weeks this coming month. Or that one of my students would bag a three-book deal of the historical mystery series she brought to class. Or that another would – at my suggestion – decide to fictionalize her own life and be the first among them to be published.

Am I proud of my seven students who have published their novels? You bet I am! And considering how many of them are publishing in the next few weeks – along with others who already had the unique joy of holding a completed book in their hands – I invite you to celebrate them along with me.

Oh, and I blurbed many of these books – how could I not? My blurbs, where given, appear below each tribute to these wonderful writers.

Eileen Sanchez was my very first published student. Her novel, FREEDOM LESSONS, was launched pre-pandemic, and she had the wonderful experience of an in-person book launch, along with other physical events, before COVID shut her down. Eileen took her personal experience as a second-grade teacher in Louisiana during school integration and turned it into a novel told by three point-of-view characters – a naïve white teacher (her stand-in), a Black teacher with deep roots in the community, and a Black teenager whose entire life is uprooted when he is sidelined from playing football on the so-called integrated team. Eileen’s writing won a Silver Medal from The Sarton Awards and was lauded in the Library Journal’s Premium Review.

My blurb: In her riveting novel, Eileen Sanchez makes us feel the pain of a Louisiana community as deeply rooted prejudice undercuts school integration. Through her three characters―a white teacher from out of state, a hometown teacher scarred by personal slights, and a high school senior denied a football career when his team is relegated to second string―we experience their heartfelt frustrations while wishing history had treated them more kindly. Sanchez’s fiction gives us a glimpse into the truth of a highly flawed time and place, and the corrosive nature of prejudice that unfortunately persists today.

Kim Harwanko published next – opting to go the self-publication route, though you wouldn’t know it from the professional looking books she worked hard to produce. She collaborated with members of her book club to write a book about a book club – NOVEL WOMEN – following it up with NOVEL WOMEN 2. These are wonderful stories filled with romance about a group of mature women that are terrific beach reads for the older-women set. NOVEL WOMEN 3 is in the works right now.

My blurb for NOVEL WOMEN 1: Being of “a certain age” myself, with my own empty nest and thoroughly enjoying my personal “second chapter,” I completely identified with the women portrayed in Novel Women. They spoke to me in ways no pert young protagonist could. I admired their close friendships, worried when they faced crises of love and life, and rooted for them to prevail. Novel Women is a fun read, and I’m waiting for book two!

My blurb for NOVEL WOMEN 2: The adventures of the members of Novel Women continue in this delightful sequel as they face fresh challenges. Troubled by family and work tensions as well as new struggles in love, they rely on the strong friendships formed in their book club to gain perspective and surmount everything life throws their way.

Liz Alterman was already published when she came to my class, but she workshopped her latest suspense novel of twists and turns, THE PERFECT NEIGHBORHOOD, at TWC. It launched this past July. Liz is an exquisite writer and her reading of the novel sent chills through us all. Her earlier novel, a young adult book, HE’LL BE WAITING, is also a suspense thriller. After her skillful reading in class, none of us were surprised by the announcement of her Audible Original book, SAD SACKED, which she herself narrated.

Then there is Mally Becker. I will never forget the day we celebrated The Writers Circle’s 10th anniversary, where, during the celebration, she announced that she’d been offered a 3-book deal from Level Best Books. The first book, THE TURNCOAT’S WIDOW, was nominated for the Agatha Award, was a Killer Nashville Silver Falchion finalist, and a Mystery & Mayhem finalist in the Chanticleer International Book Awards. It tells the story of Daniel and Becca, who save George Washington from a nefarious plot.

My blurb for THE TURNCOAT’S WIDOW: With immaculate research and a deft historical touch, Mally Becker paints the compelling story of two reluctant spies for General George Washington as they face deadly stakes and endeavor to solve a mystery that could topple the American Revolution.

Mally’s second book, THE COUNTERFEIT WIFE, takes the couple to Philadelphia to get to the bottom of a counterfeiting scheme. This book is launching on September 20, and Mally is already at work on the third installment which will bring her two protagonists to Paris. Mally is now teaching Exploring Mystery Writing at The Writers Circle and we’re delighted to have her on our staff!

Launching on September 13 is ‘TIL ALL THESE THINGS BE DONE by Suzanne Moyers. I remember being bowled away in class by Suzanne’s amazing grasp of the early 1900s, particularly her ability to render the dialogue of Texas particular to that era. Hers is the first launch party I’ll attend this September, taking place on the 13th in one of my favorite bookstores in Montclair. I’m hoping the book receives the attention it truly deserves.

My blurb: A brilliantly delineated coming-of-age story, Suzanne Moyer recreates the early 1900s of rural Texas as a young girl struggles with tragedy, poverty, prejudice, and a searing betrayal that refuses to let her go. Impeccable research and a deft ear for local dialogue enrich this fully immersive debut novel.

Also launching on September 13 is Andrea J. Stein’s TYPECAST. Andrea is already getting a great deal of bookstagram love for this novel about Callie Dressler, whose ex-boyfriend brings their breakup to the big screen. I just hope that someone producing Netflix series realizes the on-screen potential of this novel! This second launch party takes place two days after Suzanne’s, on the 15th.

Just a week later, on September 20, Debra Green will launch her THE CONVENTION OF WIVES – and celebrate her publication in the third of the launch parties on that same day. The novel tells the story of a friendship that becomes strained over a secret, a mystery that is revealed only after following the generations from a shtetl in Odessa to the comforts of Scarsdale, an uprising in Glasgow to servitude in the Caribbean, and a trek through the Alps to a displaced persons camp in Italy. Debra is a terrific marketer, pre-selling the novel in innovative ways that brought her to #1 on Amazon’s list of New Jewish Historical Fiction.

My blurb: A medical mystery reveals devastating secrets as debut novelist Debra Green unspools the history of two intertwined families back through the generations. Rich in historical detail and deeply perceptive insights into the nature of betrayal and love.

Robert Heinlein, himself a writer of great repute, once said “When one teaches, two learn.” And it’s true that I’ve learned as much from these talented writers as I’ve been privileged to teach them. I’ve enjoyed so many of their milestones – writing “the end” on their first drafts, wrangling with the many revisions of their stories, their very different modes of publishing – from self-publication to hybrid to small press. I am thrilled to have taken part in their journey to publication and am delighted to applaud their talent and perseverance. Very best of publication luck, everyone!

PS. DO support these writers by buying their books!