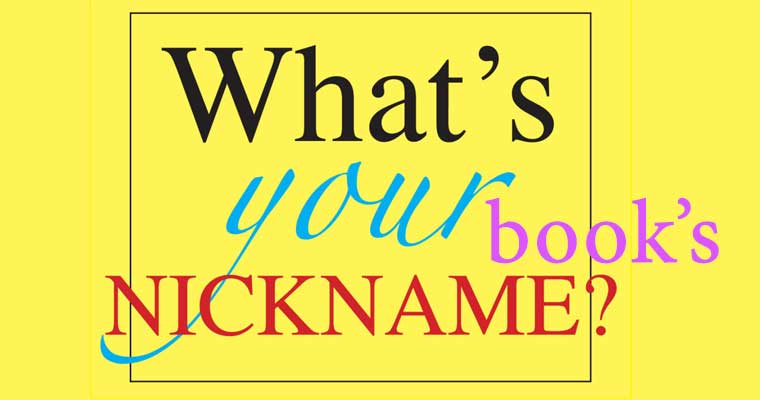 Fellow writers! Do you abbreviate your book titles? Or give them nicknames? At least in your own mind? I do. I suspect most other authors do as well.

The thing is, often the title is a mouthful. Take my previous historical novel – The Fruit of Her Hands: the story of Shira of Ashkenaz. Naturally, I rarely if ever included the subtitle when mentioning the book title. I’d gone through title hell with it – I’m bad devising titles – and actually had hit on Shira of Ashkenaz in one of the several go-rounds trying to find the right one. I still feel it’s a better title for the novel, but my editor at Simon & Schuster wanted me to choose something biblical. She loved The Fruit of Her Hands, from Proverbs 31, so that became the title. She compromised by allowing me to include the subtitle.

But The Fruit of Her Hands is a lot to say. So – informally, of course, when I spoke of the book to the people who ushered it through the publishing process or to friends, it became Fruit. One basically meaningless word that could emerge trippingly off the tongue. I must admit, however, the novel remains ever and forever Shira in my own mind, because my main character was its heart and soul.

My first published book, the verse novel In the Shadow of the Globe, became Shadow or Globe interchangeably. Globe was probably the more descriptive of the two, as it referred to the Globe Theatre, but for some reason, Shadow is always the word I think of first.

Both books lent themselves more to one-word informal nicknames than my current novel. Beyond the Ghetto Gates was the result of another drawn-out multi-episode of title hell, and even while I love the ambiguity of “beyond,” as it can mean inside or outside the ghetto, the actual word “Ghetto” leaves itself wide open to interpretation. Just a few days ago, someone asked me if I had written a #blacklivesmatter book – I had not – and many people, despite the long skirt the character wears on the cover, ask if the novel is about the Warsaw or other Eastern European ghetto during the Holocaust. As I explained, you only need to flip to the back cover to learn that this is an Italian ghetto during Napoleon’s time. But I learned recently during a radio interview that the concept of Italian ghettos, including the original one in Venice, is not universally known. And including the word “Jewish” and “Italian” into the title would have torpedoed it entirely. Can you imagine – Beyond the Jewish Italian Ghetto Gates? Wow.  Talk about a mouthful.

(Why not include all that pertinent information in a subtitle, you ask? Maybe I should have, but frankly, I shied away from it, not wanting to limit my audience to just Jewish readers.)

So calling the book by its natural one-word title, Ghetto doesn’t work at all. And Gates provides about as much meaning as, well, Fruit. But I needed something shorter to hold onto.

Somehow the sound of the books’ initials – BTGG – just work in this case. It wouldn’t have worked with the others. TFOHH or ITSOTG don’t flow the way BTGG does. Examining why, it seems self-evident – it’s the natural rhyme of the letters, all ending with the “ee” sound. So BTGG it became – informally.

And sure, I realize this kind of titular language minutia is a form of inside baseball, and perhaps only my fellow writers can relate to it. But words are fundamentally important to us – and our books, as has often been said, are our babies. So giving them nicknames or abbreviations – like Liz for Elizabeth or GJ for Gordon John – just feels natural. And I’m betting I’m not the only author who does this!