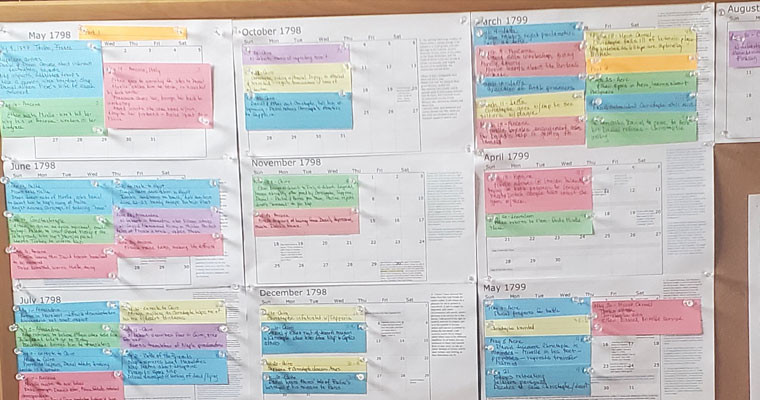 I am taking The Writers Circle’s excellent revision class as I work on my sequel to Beyond the Ghetto Gates, with the working title of Napoleon’s Mirage. We were given an assignment to create a plot point document, spelling out, in brief, what the significant moments of the narrative would be.

I was more fortunate than the rest of my classmates, because I’d already created a storyboard for the novel. All I had to do was transfer my handwritten notes from the colored notecards that I’d pinned to an enormous bulletin board to a Word document.

But if I tell you that that simple task took me close to four hours, I think you’ll understand why I say there was **So Much History** that I had to integrate into the narrative.

Napoleon Bonaparte, even during these pre-Emperor days of his career, was not a man who relaxed. Ever. In Chapter 5, for instance, he spent about a week in Malta, issuing hundreds of orders that completely overturned the centuries-old social and legal system of that country. His single-minded impatience during his Middle Eastern adventure led to conflicts with the British, the indigenous Egyptians and Mamelukes, as well as the powerful Ottoman Empire. He fought under the shadow of the Pyramids, then commanded several other battles throughout Egypt and Israel, put down a revolt in Cairo, tried to bring his personal notion of civilization to the population, and made contradictory proclamations to the various communities living there – the Muslims, Coptics, Jews, Bedouin, and more. He founded the Institut Egypte where the more than 100 scholars, artists, engineers, doctors, and other professionals – most of whom had sailed to an unknown destination simply due to the magnetism of the young general – would conduct scientific and artistic endeavors. And he took a mistress.

One grows breathless, trying to keep up with the man. And he’s only part of the story I tell.

So how does one handle this? Clearly, choices must be made. One easy decision was to collapse the number of battle scenes that actually took place. I allude, for example, to the war that is being waged in Upper Egypt by Napoleon’s generals, but the reader won’t experience the conflicts first-hand. Two battles were fought before the French reached Cairo – I folded them into one. And the critical Battle of the Nile, which would sink the French fleet and maroon their forces in Egypt, is related briefly by a secondary character. Believe me, there’s plenty of warfare that takes place in the novel – any more would have exhausted the reader, never mind this writer!

Another decision is to intertwine the fictional story with the factual events – something every good historical novelist is obligated to do anyway. But there were some fun – and not so fun – opportunities in this case. The Turks are never informed of Napoleon’s intentions? One of my new characters, a spy, discovers that fact while he’s in Constantinople. A revolt in Cairo? A soldier is wounded and wakes to see a beautiful woman staring down at him and – naturally – falls in love. Attempts to win over the vicious Pasha Ahmed, aka The Butcher? A character sits nervously waiting for an audience while the Pasha cruelly maims a man off-stage, with accompanying screams. Napoleon dispatching a soldier back to Paris to allow him to seduce his wife? This becomes an opportunity to send an all-important letter to the woman one of my soldiers pines for.

And then there are historical events that simply didn’t fit neatly into the narrative – though one in particular I couldn’t resist. The discovery of the Rosetta Stone happens after the main action of the novel. But how could I possibly leave that out? So I used the convention of an epilogue to at least allude to it.

I’ve written novels where large swaths of time happen between one historical event and another –a very different type of problem. Not this time. My hope is that the breathless momentum of Napoleon’s Mirage, with **So Much History**, will keep my readers turning pages. It certainly kept me feverishly writing!