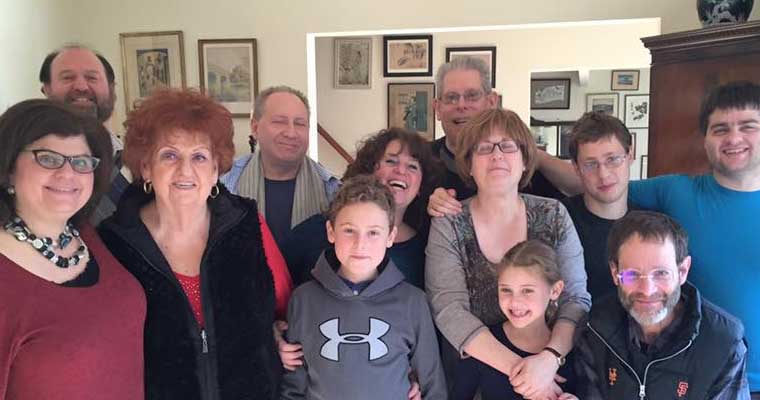 My husband’s Aunt Shirley – whom I grew to consider my own Aunt Shirley – passed away last week. She was deeply loved by her immediate family, her two daughters and son, and their spouses and children. She meant a tremendous amount to my own family, bringing my sons in particular to realize that there was a warm and affectionate spot in the family tree that they could depend on as we celebrated holidays such as Chanukah, Passover, and especially the Yom Kippur break fast together.

But I had a personal (one even might say professional) connection to Aunt Shirley that was special to me as a writer. She was the type of supporter every author dreams of – and few realize.

When my novel, The Fruit of Her Hands, was due to be published, she was the first in line to pre-order it. But not just for herself – she put in a pre-order of 10 copies, which she planned to raffle off in her synagogue, the Jewish Congregation of Concordia, during an event that she organized for me. Naturally, she came to my launch party, together with one of her daughters. But it was at the aforementioned event – a luncheon for some 100 plus women in her congregation, where everyone had a kind word for her – that I realized the magnitude of her generosity.

“Everyone needs an Aunt Shirley,” I remember saying into the microphone, thanking her before launching into my book talk. And I repeated that phrase later in the day at a second event that she again orchestrated for me, for some 80 women at Regency Hadassah. It was on this day that I learned first-hand about “Florida in New Jersey,” the predominately Jewish gated 50+ communities of Monroe Township and environs, a world I’d never even knew existed before.

But Aunt Shirley’s support didn’t end there. I was constantly surprised when she’d pop up at other places I was scheduled to appear – at her daughter’s synagogue, at one in Staten Island, at a number of others. “You know,” I told her once, “I don’t change that much of the book talk from event to event. Aren’t you bored of hearing my spiel?”

“I learn something new every time,” she replied, laughing. “And besides, I’m schlepping naches.”

Schlepping naches – taking an individual pleasure from someone else’s success – is traditionally the role of a parent and close relative. She and I were really only connected through our marriages into the Cameron clan, so for her to apply that phrase to me and my novel meant the world to me. You can see why I will always consider her my Aunt Shirley, not just my husband’s.

She was excited about my forthcoming book and had one last good deed to do on my behalf – reintroducing me to someone at Regency Hadassah, whom I’m now in contact with. It will be a bittersweet moment, going back to Monroe Township without seeing her there, cheering me on. Because, after all, everyone needs an Aunt Shirley.

Image: The Camerons celebrating together. Aunt Shirley is the fetching redhead.