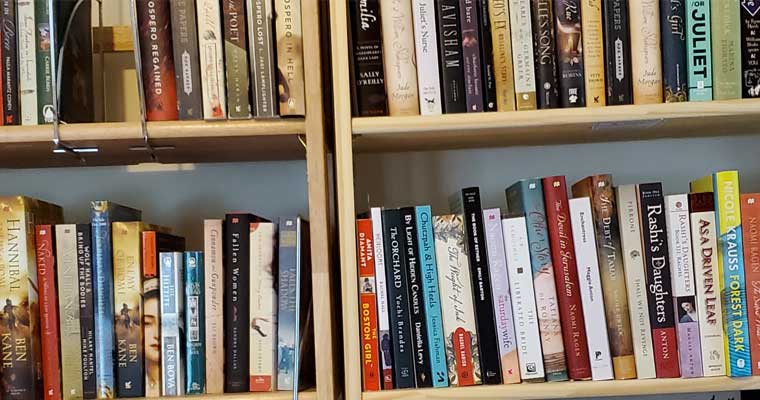 I don’t usually indulge in Facebook games. I know better than to take surveys (What hero in literature are you? Are you a cat or a dog? What do your favorite foods tell you about your personality?), knowing or at least suspecting that someone is using my responses to data mine and target me in advertising or for even more nefarious purposes.

But when my friend, past student, and TWC instructor Laura Romain tagged me in Facebook’s book cover game, I decided to play. Like any writer, I’m a huge proponent of reading, with books in every room in the house. Easy enough to select seven covers of books I love. (Actually, not so easy – just seven? My beloved books easily number in the hundreds.)

But the rules of the game bugged me. Here they are:

Day (1-7) – I have accepted a challenge from Laura Romain to post the covers of 7 books I love (1 book per day, 7 days) — no explanations, no reviews, just the covers. Each day I’ll ask a friend to take up the challenge. Let’s promote literacy and a book list! Today I nominate (fill in name of Facebook friend here).

No explanations, no reviews, just the covers? Are you kidding me?

So I decided, now that the game is over and I have named my seven, to ignore the rules and tell you why I chose the seven books I did.

Day 1: Désirée by Annamarie Selenko
When I was either a tween or teen, I asked my sister to suggest some books for me to read, having tired of the more traditional choices. One of these was Désirée, which told the story of Napoleon Bonaparte’s first love, Désirée Clary, who eventually became the Queen of Sweden because of her marriage to Jean-Baptiste Bernadotte.

The novel was my first introduction to Napoleon. The erratic, frantic personality that Annemarie Selenko endowed him with was a huge influence in how I painted him in my forthcoming novel, Beyond the Ghetto Gates.

Day 2: Villette by Charlotte Brontë
Yes, of course I loved Jane Eyre – but who didn’t? In fact, I found Villette, the story of Lucy Snowe, a diffident young woman who had to fend for herself in adverse circumstances, eventually ending up in the fictional French-speaking city of Villette and falling in love with the fiery and irascible  professor, M. Paul Emanuel, to be the most intriguing of Brontë’s novels.

First of all, Lucy Snowe was a heroine close to my heart – shyly retiring yet unwilling to be let anyone take advantage of her. As many of my students know, I have serious issues with the current trend toward the “feisty” heroine of historical novels – because social conventions often constrained women in ways that don’t lend themselves to feistiness. Lucy was very close to another book and heroine I love, Fanny Price from Mansfield Park, an Austen novel that nearly made it onto my list. More on Austen in a bit.

In addition, I’ve always been intrigued by how Brontë allowed her father to overrule her initial impulse toward a tragic ending – prompting her to soften it and give the reader room to perhaps create the romantic ending they wanted. As someone who recently had to change the ending of Beyond the Ghetto Gates. several times to accommodate comments from my beta readers, I understand Brontë giving in to pressure – even while I still think the tragedy would have suited the narrative better than the uncertain ending she gave us.

Day 3: Portrait of Jennie by Robert Nathan
This poetic, mysterious novel of a girl who apparently grows up more rapidly than actual time would allow and the artist who falls in love with her, finally painting a stunning portrait of her that would grace the walls of a museum, is a book that stays with you long after you put it down. I never liked the movie version, which might be unfair, because I don’t think any film could capture the ethereal, mystical atmosphere of Nathan’s novel.

Day 4: Daniel Deronda by George Eliot
As much as I love Austen and two of the three Brontës (Wuthering Heights always freaked me out), I admire George Eliot’s sense of world and craft beyond compare. And of course, I pondered whether her masterwork, Middlemarch, should have been the cover to list, but Daniel Deronda holds a special place in my heart.

I mean, come on, a sympathetic Jewish heroine in Victorian England? How could I resist? Eliot would never have survived today’s #ownvoices, cultural appropriation controversy, especially as she got a lot of the Jewish stuff wrong. But even the attempt to create empathy for the plight of the Jews at a time they were reviled and shunned was laudable. It harkened back to Ivanhoe, a book I found interminable in its middle, but which was certainly true to the threat to Jews in the Middle Ages, a theme I of course explored in The Fruit of Her Hands.  Daniel eventually finding out that he can marry Mirah because he, too, had a Jewish mother might be a little pat, but it did wrap up the story with a nice little bow.

Day 5: An Infamous Army by Georgette Heyer
Okay, maybe this isn’t my absolute favorite Georgette Heyer, but picking that would be an almost impossible choice. I grew up reading all her historical romances, and like so many other historical novelists I know, her influence on my choice of genre was profound. Heyer was a master of historical details, integrating them so neatly that the reader ultimately feels that she could be dropped into her world and actually know how to dress, behave, and snare a wealthy aristocrat.

But having written Beyond the Ghetto Gates, with its Napoleonic battle scenes, and being forced to  pick a single Heyer, An Infamous Army was the obvious choice. The book is considered so authentic in its portrayal of the battle of Waterloo that it is assigned reading at Sandhurst, the Royal Military Academy. This novel’s exactitude is an inspiration to anyone who attempts to portray military campaigns with any degree of accuracy. Here’s hoping I’ve achieved it!

Day 6: Jane Austen in Boca by Paula Marantz Cohen
As I got to Day 6 of the game, it got harder to pick a book. There were so many possible options – and I knew which one I wanted to post on the last day, so this was my final opportunity. Browsing my bookshelves just made it worse. Should I add Apprentice to the Flower Poet Z by Debra Weinstein – a novel that appealed to the poet in me, portraying the treacherous poetry world of a university in New York? Or Slammerkin by Emma Donoghue, who captured the sordid world of 17th Century prostitution? My first agent loved this book so much that she once asked me why I couldn’t write a novel like that, a question that left me feeling rather diminished. Or a favorite childhood novel, Emma of Deep Valley by Maud Hart Lovelace, the author of the Betsy-Tacy books? And then of course, there was the entire Anne of Green Gables series.

Or any of Jane Austen’s books – all of Jane Austen’s books, in fact. I have a great shirt I bought in Bath that says “This is what a Janeite looks like” – so how could my list not include at least one Jane? And that’s what drove me to my penultimate choice. I don’t always love Jane Austen adaptations, though some – such as Clueless the movie – are brilliant. But Jane Austen in Boca didn’t fall into the trap of so many contemporary-to-Jane clones, particularly in trying and failing to mimic her language and cadences. I’m firmly of the mind that it can’t be done. This novel, however, like Clueless, set the plotline firmly in the present day, brilliantly skewering a world I know peripherally, that of the social sphere of Florida Jewish seniors. It’s a lighthearted and charming romp, even with its overly rushed ending.

Day 7: 84, Charing Cross Road by Helene Hanff
My list would not be complete without at least one epistolary book, a format that I love and which I may well attempt for my next novel. And from the very beginning, I knew I’d end this game with this well-thumbed collection of letters between New Yorker Helene Hanff and her bookseller across the ocean in England.

It is a deep, abiding affection for books – generally memoirs or histories, not novels – that makes 84, Charing Cross Road sparkle. Hanff speaks so compellingly about her favorites, is so brash in her dealings with the urbane Frank Doel who tries his best to locate the volumes she wants, that I dare any reader not to fall in love with this one.

And because of its portrayal of the love of books, it is a good place to end this list of seven – and I’m grateful to Laura Romain for nominating me to play. Would that all of Facebook’s games were so meaningful!