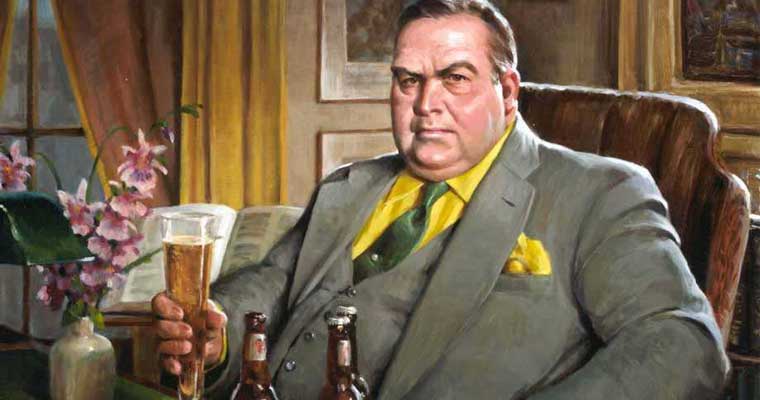 I tell my writing students at The Writers Circle that I’m an eclectic reader, and it’s true. But I do have genres I avoid, including horror and mystery. So the fact that Rex Stout’s Nero Wolfe series has been part of my “comfort reading” for many years now is in itself a mystery.

But let me first define what I mean by “comfort reading.” It’s a rare day that I’m not reading something, generally a novel, and I find it hard to fall asleep without a book in my hand. As a writer myself, when I’m immersed in my own writing projects, I gravitate toward books that it easy on my cerebrum. And I tend toward series, because it feels natural to hop from the end of one to the beginning of another. An inveterate re-reader, I can ignore my overflowing TBR pile for days, weeks, even months at a time as I slip back into the comfort of ground already tramped and worlds already explored.

So, Rex Stout and Nero Wolfe. For anyone unfamiliar with the series, it centers on the mysteries solved by the vastly overweight genius detective Nero Wolfe, who rarely if ever leaves his Manhattan brownstone. Wolf is ably assisted by his legman, the noir mystery-lite Archie Goodwin, who also narrates the books. The novels span several decades, with the first published in 1934 (more on this in a minute), but the characters don’t seem to grow older, even though the world around them does marginally change.

As I said above, I’m not a mystery fan, and what first attracted me to the books (aside from the fact that they were readily available in my parents’ home) was the atmosphere of the brownstone, the gourmet meals that were prepared daily for the unapologetically corpulent Wolfe, and Goodwin’s sardonic narration. In many ways, my approach to this series resembled my comic book reading, where I’d skim over both battles and mystery clues to linger on the relationships and setting.

But having picked up the books again recently, I found myself much more involved in even these details – and as a teacher of writing, I began to analyze why. My students who are aspiring novelists themselves often tell me that they read differently now that they are absorbed in the craft of writing, and of course, my own reading has long been layered by observations of a writer’s technique.

And Rex Stout really was a master of the craft. The world he paints is so consistent that his books are – almost – interchangeable. Oh, there are times when Nero leaves that brownstone, complaining all the way. But even then, there are details that repeat themselves, such as his desperate search for a chair big enough to accommodate his bulk. However, the mysteries themselves aren’t interchangeable and most are ingenious. And for anyone interested in plotting and pacing, reading them as a series can be instructive.

It was clear that Stout himself was fully engaged in the craft of writing, even including insights about it, as elucidated by the brilliant Nero Wolfe. One of my favorite examples comes from Plot It Yourself, a novel about a series of fake plagiarism claims that was bankrupting authors and publishers:

A clever man might successfully disguise every element of his style but one — the paragraphing. Diction and syntax may be determined and controlled by rational processes in full consciousness, but paragraphing — the decision whether to take short hops or long ones, whether to hop in the middle of a thought or action or finish it first — that comes from instinct, from the depths of personality.

It’s a shrewd and astute observation, coming from a deeply thoughtful author.

With all the books I read – including many that you might think more worthy of my attention – why am I blogging about this particular author? Mainly because I am nearly at the end of my comfort-series-read, and for no reason whatsoever, I ended by reading the first in the series last. 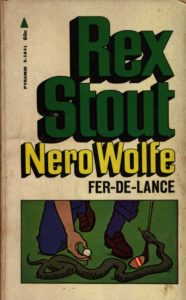 Fer-de-lance was published in 1934 and served to introduce Wolfe and Goodwin to the world. Stout did his upmost to create a world in media-res – with plenty of reminisces on Archie’s part of solved mysteries past, as well as repeating a few times that he’s worked for Wolfe for seven years – but after spending weeks with later books in the series, it’s eminently clear that this was Stout’s virgin effort. The book is longer than it needs to be, with many more details than required, so that his usual smooth pacing is off. The plot itself is almost too clever and the difficulty in solving the mystery too profound. Even the cast of characters aren’t quite gelled as to their personalities, including, surprisingly enough, Wolfe himself. And because of when it was written – during the Depression with its somewhat warped view of women, Archie, always a bit of a misogynist, makes statements about women that make this reader, at least, cringe. It’s clearly the work of a novice finding his way – but not quite succeeding.

While it’s hard to tell anyone committed to the craft of novel-writing that they would be best off using a first (or so) novel as practice, even Rex Stout would have been better served by discarding this one. I’ve shelved entire novels myself, after years shaping them, for a variety of reasons, especially issues with plot. What’s been valuable about this is that I’ve used them almost as extended character studies, which has shortcut the process of writing more successful novels using the same cast of characters. This was certainly Stout’s experience after Fer-de-lance – and it’s been mine for my forthcoming Beyond the Ghetto Gates, in which I adopted several characters from a previous failed work. This isn’t a technique I would recommend for any writer – it’s too long and frustrating a process – but better that than publishing an early effort that isn’t working.

Of course, Rex Stout was wildly successful and me, not quite yet – so who am I to tell him this first book was a failure? But the reader-writer in me argues that I can. So I have.