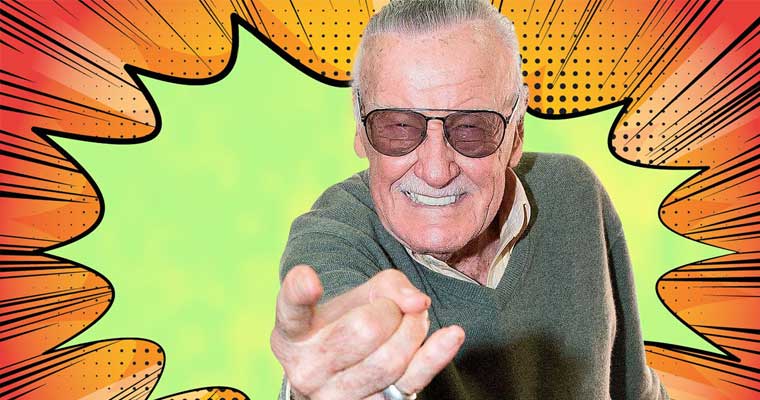 When I learned of Stan Lee’s death, I posted his traditional comic book sign-off of ‘Nuff said on my timeline and moved to other things. But as the afternoon wore on, I realized it wasn’t nearly enough said. Because I owe Stan Lee my marriage, my first house, and an enduring connection with my sons and the children I teach creative writing to.

My brother Matthew was an avid comic book reader. When the new comics would come out, he’d beg a trip to the tiny comic book store in Little Falls, NJ. With his allowance in his pocket and my mother patiently waiting in the car, he’d spend his money on his favorite comic books – particularly those by Marvel.

I wasn’t nearly as engaged by the universe created by Stan Lee and his cohort of writers and artists as Matt, but I would surreptitiously borrow them and skim through the battle scenes to get to the pages I enjoyed about the relationships forged by his comic book heroes. I rooted for the friendships and the romances in the Fantastic Four, Avengers, and X-Men, among others, empathized with Spiderman’s deep angst and the Thing’s simmering anger about his rocky form, and recognized in Doctor Doom the deeply layered prototype of the best villain ever created.

But it wasn’t until many years later that comic books fashioned my own romance. My parents moved us to Be’er Sheva, Israel, and it didn’t take us long before we found the only second-hand English bookstore in the city. The woman who owned it kept a supply of comics for her displaced American patrons, and it was there my brother met the man who would woo and win me.

Steve was a much more serious collector of comics than my brother, who had never gone to the lengths of encasing the thin books in plastic covers and storing them in the proper environment. But they were kindred spirits nonetheless, and it didn’t take long before Matt hauled Steve to our Be’er Sheva apartment, to show him the comics he had brought with him to our new home. And just like that, we met.

Steve could talk comics with Matthew for hours and I’d chime in, well, sometimes. Steve discussed comic books on a level I could never attain, about specific artists and writers – how Roy Thomas was educated at Harvard and raised the comic vocabulary level to a collegiate level; how much he admired Barry Smith’s Conan artwork and Steve Ditko and Jack Kirby’s artistry; how Jim Steranko was a game changer with his use of psychedelic and avant guard art. I might not have been able to add much to these conversations, but I was good at nodding approvingly. So when I say comic books – and Stan Lee – were responsible for my marriage, it’s absolutely true.

We lived in Israel for several years, but eventually found our way back to the States. We started a family and wanted to buy our first house, in Randolph, Massachusetts. It was then those carefully packed and stored comic books took on new significance. Steve had purchased every Marvel comic from 1961-1976. This collection included extremely valuable issues. Amazing Fantasy #15, with the first Spiderman adventure. Fantastic Four #1 and Fantastic Four Annual #1. Tales to Astonish #60, with the first appearance of the Hulk. And much more. The collection was valuable enough that selling them gave us the edge we needed to put a down payment on that first, much loved home.

As a kind of recompense for selling the comics – which would probably make us multi-millionaires today if only we’d kept them in that same pristine condition – Steve treated himself to anthologies of the comics. They surround me as I write this – large bound books of the super heroes who made up the Marvel Universe, both from the golden age of comics as well as our own heyday of the ‘60s and ’70s. And yes, as we grew older, we lost touch with that world. Every once in a while, we’d go into a comic book store and skim through the books, noticing somewhat disapprovingly how different they felt from the versions we grew up with.

We gave the anthologies to our sons to read when they were old enough and talked together about them. It meant both they and us had enough understanding when the movies and TV shows came out, including all the reboots. As we’d watch, there would be a constant dialogue going on in the background: “Oh, I remember that.” “Wait, isn’t that…?” “Whatever happened to…?”

And when I started teaching creative writing to children, especially to the younger boys, it gave me a certain degree of street cred to be able discuss the heroes intelligently. “How do you know all this?” the kids always ask me in wonder. And I’ll smile and sometimes even say, “Well, I got married because of comic books.”

There, now truly ‘nuff said. Rest in peace, Stan Lee – and thank you.