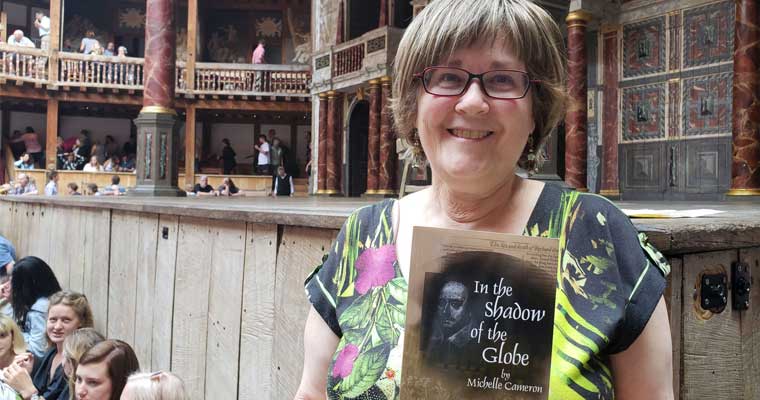 The first time I went to the Globe Theatre was back in my distant past – pre-boys, if you can believe that – and my husband and I were making our way through London. Avid Shakespeareans both, of course we had to go to the site of the original Globe Theatre, where they had just sunk the cornerstones for the new Globe.

It was muddy, and cold, and the place looked like the construction site it was. I had wanted to close my eyes and imagine my beloved William Shakespeare and the Globe actors I was beginning to know so well moving about the space. Not entirely successful with the noise and wind, I’m afraid. 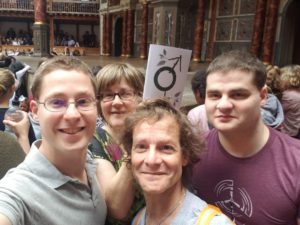 But it was thrilling, nonetheless. A big part of that particular trip was dedicated to the research I was compiling for my young adult novel, named for a line from As You Like It – Out of Suits with Fortune. In it, the young teenage heroine sells her exquisite clothing to the Globe actors to remedy her empty pockets, and one of the young apprentices – Samuel Gilbourne – falls for her.

Don’t go searching on Amazon for the book, though – because it never saw the light of day. It was my first serious novel, however (there were two other YAs preceding it), and part of me is sorry that I let a subsequent viewing of the film Shakespeare In Love stop me from pursuing publication more assiduously. As a sidenote – don’t assume that because someone else comes out with your theme that you’re dead in the water – often it means that you’re actually on the crest of a trend. But those were the days I was young and uninformed about how to get published, and the kids came along soon after… and you know how that goes.

But I digress. That trip was amazing, allowing me to immerse myself in the period, and it was hugely helpful when I took all that research and turned it into my verse novel – In the Shadow of the Globe (which yes, you can find on Amazon). As my first published book and undoubtedly my most literary work, I remain inordinately proud of it. 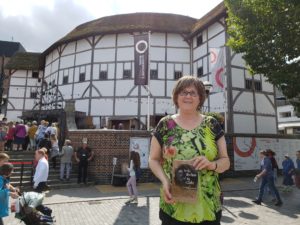 So of course when we planned our Summer 2018 trip to London, there was no question that we were going to the Globe Theatre. And when I learned that one of the plays this summer was As You Like It – well, I thought my head was going to explode.

My husband, boys, and I played groundlings – standing in front of the stage to watch the performance. (A bit of advice: wear comfortable shoes if you ever go.) The play itself was everything I hoped it would be: wonderfully tongue-in-cheek, several moments of side-splitting low-brow humor and some deliciously emotional scenes, with some of the actors playing multiple roles. And then there was that amazing moment when Rosalind places a chain on Orlando, who has just wrestled against a daunting foe and won: “Gentleman, / Wear this for me—one out of suits with fortune / That could give more but that her hand lacks means.” Of course I mouthed along.

I probably went overboard, posing with my book in front of the Globe Theatre, by the stage, and in front of Globe gates. But I felt every bit a pilgrim who had finally accomplished a long-awaited holy journey and arrived at a sacred space.