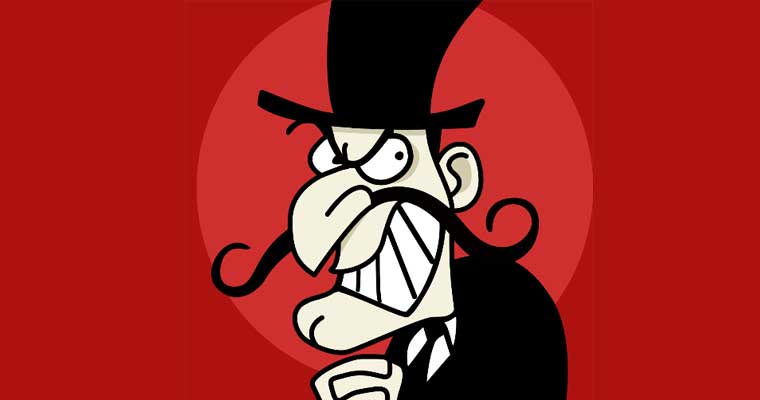 Hamlet had it right. When we write the villains in our stories, we want to give them a chance to smile. Too many writers portray the bad guys as literary devices and not as actual people. They become abstractions, obstacles in the way of our hero winning the day. We know instantly not to trust them when they appear, and without any redeeming characteristics whatsoever, all we can do is root against them.

Well-developed antagonists, on the other hand, give us pause. When a writer takes the time to consider why they’ve turned to the dark side – whether it be through personality or circumstance – suddenly their motivations and character development become just as much part of the story as that of the hero’s. Take one of my favorite literary characters, for instance – a villain we root for through nearly the entire scope of a lengthy novel – Miss Becky Sharp of Vanity Fair:

Rebecca Sharp looked like a child. But she had the dismal precocity of poverty. Many a dun had she talked to, and turned away from her father’s door; many a tradesman had she coaxed and wheedled into good-humour, and into the granting of one meal more.

No wonder this anti-heroine grows up thinking she needs to be grasping and greedy. Because we understand how her desperate background haunts her, we’re willing to set aside Thackeray’s Victorian morality and wish her well. It’s only later in the novel, when, as wife and mother, her intrinsic greed still rules her, that we finally turn our backs on her and her character’s downward spiral speeds into tragedy.

A complex villain is more intriguing to ponder than a straightforward one, especially those who trouble to hide their cunning side. Taking the current mania for Game of Thrones as an example (while avoiding spoilers), we love to hate both Cersei Lannister and her son, Joffrey Baratheon. Joffrey, in particular, is everything we picture as the caricature of a villain: capricious, cruel, malicious, a bully in every sense of the word. We can picture him as the kind of young boy who pulled off butterfly wings and tortured puppies. Yet other characters in George R. R. Martin’s universe are all the more evil for hiding their intentions. Lord Petyr Baelish, nicknamed Littlefinger, has shown his true colors in the most recent TV season. Having insight into his character before now, we’re not surprised at the depth and breadth of his ambition. But something about his sleazy gentility makes us want to see how far he’ll actually succeed. This is very different from our clearly antagonistic feelings toward Joffrey.

If your villain is not strong enough to thwart your hero, the one-sided quality of the conflict can deflate a novel’s tension. Villains need to have some quality that our heroes must contend with. This doesn’t mean they have to be smarter, although that doesn’t hurt. Our favorite superhero villains, for example, are the smartest, most inventive ones – the Dr. Dooms and Lex Luthors. But often stupidity can work in a villain’s favor. It means they’ll act in ways that the hero couldn’t possibly anticipate, much like the idiot driver on the cell phone who swerves unexpectedly into your path on the road.

If your villain spends all her time contemplating the evil she’s going to do and never doing it, the book won’t work. She actually has to do something –set fire to the house, torture the victim, steal the treasure. While we want to understand a villain’s motivations, it’s only through their actions that we recognize them. And besides, action is what fuels conflict in your story and ramps up its tension.

Evil though we may think them, it’s wise to consider that the villain believes the story’s all about him. I’m going to say that again: the villain believes the story’s all about him. Just as your hero wants something, and that desire underscores the plotline, the villain has his own set of ambitions. Ask him, and he’ll tell you that he’s not just there to be the foil for hero. Indeed, often he could care less about the hero. This is why letting the villain speak for himself – allowing him to be the focal character – can be incredibly revealing to the writer.

Suddenly, you’ll discover things about the villain you never knew. She has a whole range of hopes and desires that, yes, are often in direct conflict with your hero, but just as often are hers alone. A great “off-the-page” exercise is to consider your story from the villain’s point of view. She has to face the mirror every morning. Believe me, she doesn’t look deep into her reflection and contemplate how to be a better villain. She’s thinking about how she can get what she wants – just as your hero is.

Besides, writing in a villain’s voice is a lot of fun. Jane Austen reputedly fell in love with her antagonist, Henry Crawford, in Mansfield Park. Considering how much more lively he was than the staid, moralistic heroes of that book, its little wonder. A well-written, well-conceived villain pops off the page. Often writing villains reminds us why we became writers in the first place. Inhabiting their ambitions, devolving into their characters, and writing their voices can give your story dimension that it would otherwise lack.

So treat your villains well – write them with care, give them reasons for being the way they are, even allow them to win some of the time. You’ll find your story is all the richer for them.