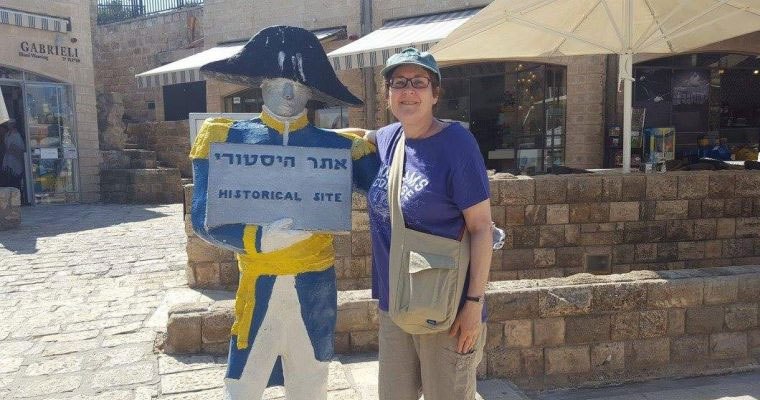 I’ve never before had the opportunity to research my novels in the places they happened. When I was writing both The Fruit of Her Hands and my current work, a variety of factors kept me at home – not least of which was the expense. Traveling to France, Germany, and Italy simply wasn’t going to happen when I was paying for my two sons’ college education, or when I opted out of the commercial sphere to become a partner at The Writers Circle.

But a recent trip to Israel allowed me to actually work “on the ground” and visit some of the places where Napoleon Bonaparte fought, won, and eventually lost. It was an amazing trip and proved how valuable it can be to actually be present in the same space as your historical and fictional characters.

Napoleon was woefully unprepared for the realities of a military campaign in Egypt and Israel. As I sweated through every item of summer-thin clothing I’d brought with me, walking through the desert or up the steep climbs of Mount Carmel in Haifa, I could imagine what it would have been like to be a foot soldier decked out in a wool uniform, sweltering in the unrelenting sun. As my family guzzled the water we resupplied ourselves with every place we stopped, I could picture the frustration of these same men, faced with tepid and soon depleted water holes or, even worse, a mirage that promised everything and delivered nothing.

My research trip, which was limited to Israel and which had to be carefully balanced between family needs and time constraints, could only give me a taste of what Napoleon and his troops must have felt during this somewhat ludicrous campaign. But being in the winding, often claustrophobic alleyways of Jaffa and Akko, or perched high on the ramparts of Akko, with the actual remnants of Ottoman cannon pointed directly at Napoleon, it was easy to imagine the screams of battle, to understand how terrified a lone soldier must have felt at the ululating cries of the fierce Turkish defenders, and to picture the spilled blood that must have pooled on these ancient cobbles.

Napoleon’s troops suffered from an epidemic of bubonic plague and were nursed in churches and monastaries in Jaffa and Haifa. When Napoleon faced defeat at the hands of the Turks and the British in Akko, he abandoned these men, ignominiously retreating back to Egypt.

Visiting the Stella Maris monastery on the top of Mount Carmel was particularly moving, because many of these soldiers lay under my feet. The Turkish forces had slaughtered them and scattered the monks, destroying the original buildings. When the monks returned, they buried the French soldiers in the gardens. A pyramid monument and a cross in the garden commemorate the massacre of these deserted men.

Of course, in such a limited time, I could only absorb atmosphere, not spend my time in libraries or in consultation with experts. Yet even that has proved tremendously valuable as I ponder plot points and begin to shape the story in my head. Imagination is greatly enhanced when you feel the heat on your own body, climb the ramparts in Akko and look through the crenelations to the sea, or picture the staked heads of Napoleon’s emissaries on the flat roofs of Jaffa buildings – leading to a massacre of Moslem troops that would stain Napoleon’s reputation forever.

There are still hours of research ahead of me – in books, from articles, conceiving of timelines – yet I feel like the story is much more real simply from having walked in some of the cities where Napoleon and his troops fought.