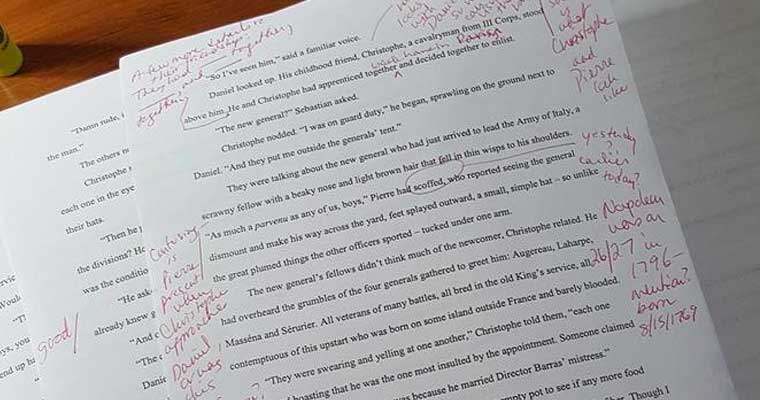 I don’t think I’ve ever been happier as a writer.

I’ve spent these two holiday weeks responding to my agent’s comprehensive edits. (Yes, agents do sometimes edit manuscripts.) I’ve discovered that she’s even fonder of commas than I am (is that possible?) and loves hyphens. She’s smoothed out some of my staccato, short sentences, and made a number of excellent word choice replacements.

But that’s not what’s making me happy.

She’s also driving me to deepen characterization as well as some of those moments that were so clear in my own mind, but which obviously need to be further elucidated. She is questioning motivation and asking me to “move the camera back,” to reveal more of my historical setting. And, of course, she is pushing me to describe more, the aspect of writing I’m admittedly weakest at.

But my happiness comes from something deeper than mere edits. I wake  every morning knowing what I have to address, excited to get to my desk. Because it’s the holidays and my sons are home, I’ve divided my day into two perfect halves – writing first, then setting everything aside to be with them and my husband. It’s worked like a charm.

And still, the wellspring of my happiness comes from something more fundamental. I’ve been pondering it for two weeks now, and I think it comes down to this:  a professional in the publishing world  believes in me, and is thoroughly invested in helping me succeed.

It’s amazing the difference one person can make. I’ll admit – I’ve been terrified for years that I’d never be published again. My first novel – published by Pocket Books, an imprint of Simon & Schuster – practically sputtered and died when my editor was let go three days before launch. The industry term is “being orphaned;” the reality is that your editor is your advocate in the publishing house, and without her, there was no one to suggest promotion, to shepherd a paperback through, to consider audio book and international sales –  none of which happened.

So for years, I was scared. I wrote another novel and discarded it because I couldn’t make it work. Then the current one: a book I fell in love with. A novel I felt might break through and get me published again.

And when my new agent told me she was “smitten” with the manuscript, smitten became my favorite word of 2015. Her enthusiastic embrace of the novel has restored my faith in my writing. Will she be able to sell it in a difficult market? She is absolutely certain she will and I’m happy right now to simply believe her.

Because no matter what happens next, I’ve decided to treasure this time. I know that such periods of absolute joy are few and far between in the world of publishing. And this moment – ending 2015 on the most magical note possible – is well worth savoring.