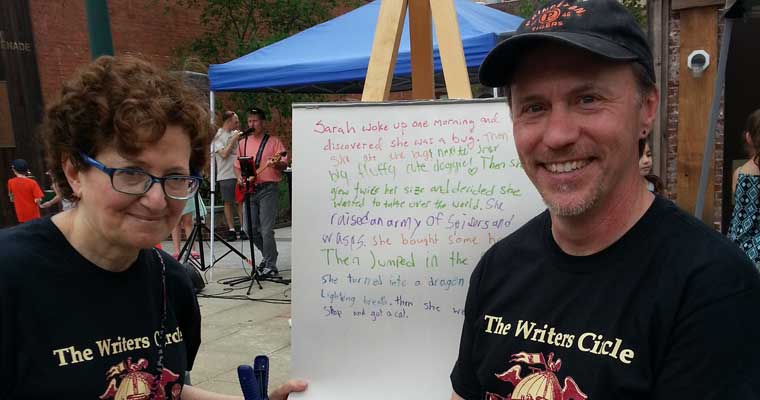 Amidst the sense-bombarding chaos at the annual Summit Street Fair, one of the ways The Writers Circle draws attention to our booth is through our Add-a-Line story board.

“Want to help us write our story?” we call out as kids and parents stream by. “We’re building a story line by line.”

Granted, not all of them stop. There are fried Oreos and hot dogs, glittering toys and face paint, and somewhere at the fair, someone’s giving the kids the chance to make clay octopi. The band right next door is blaring pop tunes, complete with a trio of singers. How can a mere story stand a chance?

Some kids hesitate, sometimes dragging a parent in tow to a full stop. Or a parent likes the idea and nudges their child over. Through the course of several hours, they add their lines to our ongoing stories.

That’s when we realize again a truth we’ve recognized over and over in our children’s classes: Don’t underestimate the kids.

It was a perfect line that flowed logically from the story – and was poetic, besides. We hope he’ll be back in four years, when he’ll be old enough to join our youngest class!

Then there was the boy whose mom had to talk him into adding to the story. After some prompting, he came up with a line that included his clear passion for soccer. Off he went down the street, and we didn’t think we’d see him again. But a few hours later, he came back to see how his story had ended.

And then there was the group of four teenagers. Some teens – as noted by the TWC intern who helped us that day – are too cool to stop. But not this group. These kids loved adding to the first story so much that they returned for a second – which they took turns writing, from beginning to end. We ended up giving them their page, an apt reward for how completely they owned that particular tale.

Don’t underestimate just how much kids can do when you appeal to their imagination and creativity. Even the reluctant ones came up with great lines – and the enthusiastic ones frankly blew us away.

Here are just a few sensational lines from the different stories of the day:

When the police tried to capture the monster, he roared with fear and thrashed all over the place.

When I lost my dog, I decided to build one. I started with my family’s recycling bin. I put eyes onto it and decided to take it on a road trip.

The bug grew twice her size and decided she wanted to take over the world. She raised an army of spiders and wasps.

She used her super dragon powers to hit the cat with lightning and turn it into the dog she had always wanted.

So he ran out of the house but the shadows were following him.

“I think we should calm down. Let’s find some help,” Charlotte said.

Sparkling crystals hung from the ceiling and added a bluish tint to the walls.

And here, because we couldn’t resist, is one entire, wacky story – the product of several creative minds:

After my hat flew off, I couldn’t find a way to hide the antennae on my head. So I tried a red blanket. But Elvis Presley ripped it off my head, exposing the antennae. John Lennon scowled at him. I ran home to find a potato flying around my room! It turns out that the potato ate my hat!

Don’t underestimate the kids. Hand them a pen, pencil, or marker, stand back – and be prepared to be amazed at what they can do.